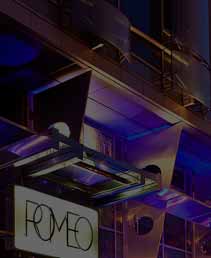 A contemporary architectural standout in the Naples skyline, the Romeo Hotel is a concentration of art, style, vitality, and comfort. Above all, it is the most iconic example of an urban development project realised by integrating the skills and expertise Romeo Gestioni acquired over the years in all areas of operation. Designed by the famous architect Kenzo Tange and built by his son Paul, the Romeo Hotel is a perfect synthesis of the best design and ‘Made in Italy’ quality, with the unique beauty of the gulf of Naples as seen from the dynamic and evocative harbour in the background.

Thus, the Romeo Hotel is a symbol, but also a warning, an indication, and a model. A "re-foundation" rather than a reconstruction, inspired by the idea of maintaining Naples as one of the cities where "business is done and can be done". And also by the idea that in a city of mythological beauty, scarred by the lack of interest and of a political plan for the its development, there are the resources, the strength, the intelligence, the skills, the style, and the stubbornness to compete on an equal footing in the modern world, which is evolving at an extremely fast pace.

Known as the "Palazzo della Flotta Lauro" (the Lauro Fleet Building) before it was restructured and eventually became an hotel, just a few dozen metres away from Piazza Municipio, it was built in the 1950s. Its rectangular shape extends along Via Cristoforo Colombo to about 875 sqm overall. Originally, it housed the headquarters of the Lauro Fleet. It is comprised of twelve floors, of which eleven above ground and one underground, for a total gross surface area of about 7,600 sqm.

The architect Antonio Scivittaro, who was responsible for the construction and executive design, set out to realise a building in step with the times, using functional, structural, and architectural elements capable of conveying the idea of modernity.

The building in Via Cristoforo Colombo cannot be defined as an historical building in the conventional sense; nevertheless, it has earned its place in history, becoming the symbol of the rise and subsequent fall of Commander Achille Lauro's empire.

Romeo Gestioni transformed this building, a symbol of the city's relatively recent history, into a one-of-a-kind hotel facility to meet the demand for tourism and conference facilities.

With the architectural design and artistic supervision of Tange Associates, one of the most renowned urban planning and architecture firms in the world, “Romeo” is the city's most significant example of a private investment consistent, in terms of time and method, with the city's strategy to reconnect the urban areas to the sea.

The Hotel entrance is in via Cristoforo Colombo, in a stunning hall appropriate for a 5-star luxury hotel. The feeling is that of a hotel paying utmost attention to design, with the purpose of marrying the high quality and exclusiveness of its materials and furnishings with a modern and original style and without sacrificing simplicity, in keeping with a taste for understatement.

A daunting challenge (combining culture and technology, different methods and schools of thought, aesthetics and architecture, engineering tools and economic planning) which faced countless obstacles, but eventually gave rise to a structure that takes away the breath of guests, visitors, or bystanders and represents the harmonic and evocative fusion of modernity and tradition. A work of art, rather than just a reconstruction.

A characteristic interior design, capable of marrying originality, modernity, history, and tradition, to ensure a "distinctive" and "luxury" feeling, always favouring the personalisation intrinsic to the very concept of distinctiveness. A custom-fit, rather than a one-size-fits-all design, capable of express itself in a modern style, “minimal but never cold", and "essential but never trivial", with vast illuminated spaces that fit in perfectly with their surroundings.

The lobby comprises lounges, Sushi-bars, Cigar-Halls, and the game lounge with the pool table.

The basement consists in a one thousand metre emotional SPA and fitness area.

Of particular importance are the suites, which come in different layouts and extend over vast surface areas, up to 85 sqm including the balcony.

On the ninth floor there are a magnificent hanging pool and the restaurant “Il Comandante” run by an award-winning chef and boasting a gorgeously stunning view.